On Goodreads and other discussion pages and groups, so often the question, "Why do you write?" The answer, for me, is complicated. I get a story idea in my head and can't get it out until I jot it down ( or on my case, type some of it out. I rarely write anything by hand). Actual writing takes some time. 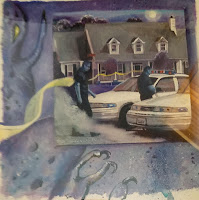 WolfPointe was written over a year. I was obsessed with getting it done. Once accepted by TTB, it was months into additional rewriting and editing. Cover art was approved ( I bought the original artwork in acrylic from the artist). It was released on disc, ebooks were in their infancy in 2001. Once my Publisher secured a printer that did a quality job in small batches, she worked with me to get Wolfpointe onto paper. That happened in 04.

My first novel, second to get published, is Starshot. Second to publication but over 40 years in the writing. This book was written because of the love of the music I grew up to and stories of so many of its Stars. I found so much of the history bittersweet, often cruel and sometimes storybook charming. So much drama, talent, greed, as well as fun, love, and downright goodness as well was involved. I knew no one story could tell the tale. I started to borrow, combine and imagine the workings. At the same time, I wanted to really humanize Deejay Gloss, who, beginning as David Joseph Glossack, just wanted people to hear his music. Friends, allies and supporters can, at once, remain but some who become foes, or resistance bearers. Some can even become dangerous.

This time I went with self-publish. I was looking for less hassle and really am not looking for money. I DO wish I was a better promoter.


So, why do I write? To tell stories.

I'm working on a sequel to Wolfpointe as my main character was very popular and readers hoped he'd come back. I too like Malcolm MacKurghdy and have not one, but two great story ideas. One is in the works now.

The other is set in a few notes. Each will be a great story to be told. I just hope I can reveal them!
Posted by Rick at 1:06 PM

A Bit About Me

This is the obligatory introduction post. It is me. Depending on who you are or how you know me - I have lots of nom de plumes. Lets briefl...